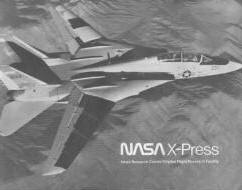 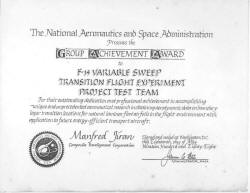 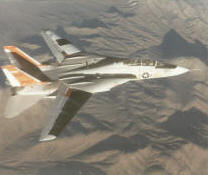 I am very proud of this award. With the help of  my crew and NASA engineers, this work accomplished some basic research. The task was to change the airfoils on "Three" F-14 wings, one at the time, then remove the change completed on the first wing and apply a third experimental airfoil on the first wing again. (the "third" wing).  The type of contract was a "cost + fixed fee". Unfortunately the "third wing" was never modified for political reasons. This cost me a small "fortune" in waiting and keeping the shop and crew ready for about a year. The failure of this last portion of the contract to eventuate, with the associated cost for waiting, essentially convinced me to get out of business and SAIL AWAY!!

The accuracy demanded for both - the absolute contours and the smoothness - was defined as THE BEST THAT CAN BE DONE!  Some place there is a quantitve description of what we achieved. Until I find that, just take my word for the fact that the "absolute" match to the computer cut, aluminum templates, was in the order of + / - 0.020". The smoothness, measured on a two inch base, was better than 0.002" on all areas other than the leading edge slat transition. It was not "staying put" These measurements were made AFTER the aircraft had been flown.

These pictures are of  the second wing.